skip to main | skip to sidebar

One of the first freeways built in the western US, was the Pasadena Freeway. Originally called Arroyo Seco Parkway, it has also been known at US 66 and now "The 110". The parkway was the beginning of the massive web of freeways around Los Angeles.

Arroyo Seco is Spanish for Dry Streambed. This route was first used by wagons in the 1800's during the dry summer season as a better alternate than the regular roads. There were attempts to use the path for an elevated bicycle route at the end of the 19th century, but the bicycle craze ended, especially since a rail line was there and the motorcar was starting to change the traveling landscape.

The Parkway was in some ways designed as more of a park than a roadway. It was very modern for 1940. The route became a speedy way for the business barons to commute between they downtown jobs and their beautiful homes in the Pasadena suburbs. Instead of solid medians there were merely flowers and a art deco curb dividing the northbound from the southbound lanes. 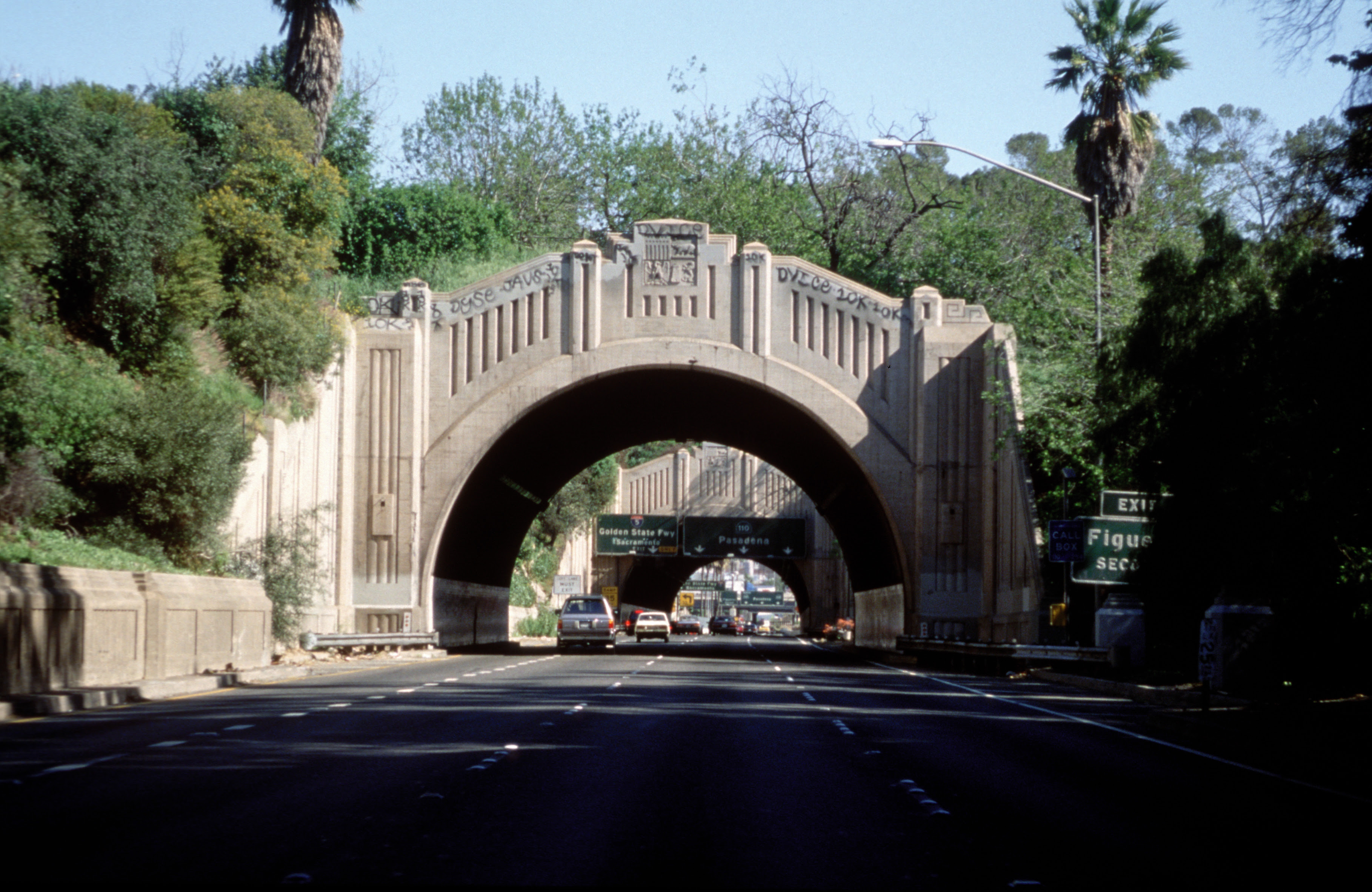 The parkway was built with stylish Art Deco bridges, tunnels and overpasses. Most of the ramps were an easy merge with the lighter traffic then, but some of the intersections were right angle turns giving hardly any time to get up to speed. Some still have a stop sign protecting you from the steady stream of cars flying by. A few of the bridges were built to cross the Arroyo Seco canyon long before the consideration of a freeway.

Built to handle 27,000 cars a day at 45 mph, it was a relaxing drive down the parkway. As Los Angeles expanded and more freeways were built the medians floral displays gave way to a steel railing. Today the freeway carries about 125,000 cars on virtually the same roadway that was opened 70 years ago.

The California Department of Transportation (or Caltrans) say it's a very accident prone highway due to speeding drivers. Many accidents damage the divider's steel railing. It's harder to repair than a concrete barrier and concrete barriers are safer, too. Since there is no good alternate for traveling between Pasadena and L.A., the state transportation department is in process of changing the parkway into a less dangerous and more-modern freeway. However, when it comes to a Historic Highway, safety isn't everything to everybody. Some are protesting the safety improvements as too much of a change to this National Civil Engineering Landmark.

Among the original design features to be removed are the curbs with designations built in to note the direction of travel. Parkway lovers say that those designations are as important as the Art Deco bridges and sycamore trees lining the route.

The changes still appear to be on the Caltrans schedule. 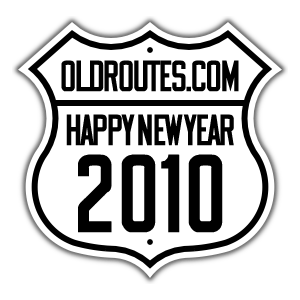 Saving an 1887 bridge in Texas

As a fan of Old Routes, it’s great to see an old bridge saved and preserved. For a century old bridge in Texas to still be used, even though only for Pedestrians, is a real bonus. Go here to check out the story of the 1887 built bridge in New Braunfels, Texas.

More photos of the Faust St Bridge
Faust St bridgebuilder the King Bridge Company
Other Historic Whipple Truss bridges in the US
Six Bridges : The Legacy of Othmar H. Ammann

Backroads of the Texas Hill Country: Your Guide to the Most Scenic Adventures

Posted by TheRoadGeek.com at 8:44 PM No comments:

This Route 66 book can be hard to find, but if you can find a copy, it’s a nice casual read. The author, Spencer Crump, takes you on a historical road trip. It has the feel of a personal scrapbook or journal with his historical musings on the road and events of the early 66 era of the 20s and 30s.

Crump includes a variety of period postcards, photos and ads to give you a better feel of the time. It’s hard to imagine hotels for a buck a night, 5-cent hamburgers and 22-cent gasoline, but the visual proof is there. There’s even something that gas stations had called, “Service with a Smile”.

Other than the cover, it’s all black and white, which does well with the historical feel of the book. Indeed, it is more than a 66 picture book. One of the real highlights for the road geek or old route fan is copies of Vintage maps from the Automobile Club of Southern California.

Check out the curios at the Old Routes Souvenir Shop

Copyright 2009 - All the World Travel LLC and Dan Smith
Posted by TheRoadGeek.com at 5:41 PM No comments: 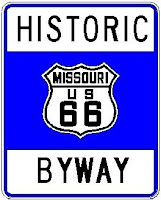 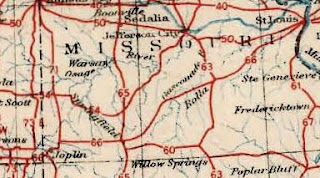 Carthage Missouri has a brand new set of Route 66 signs to guide travelers along the Mother Road. Many feel getting Route 66 re-signed will help bring interest to the old route as well as tourist dollars to the interstate bypassed cities.

And more links to other sites about 66 in Missouri.
More on the 66 Missouri Byway
The longtime proponent of Route 66 is Bring Back Route 66
66 history in the Missouri Ozarks
Missouri 66 Books and Guides

Posted by TheRoadGeek.com at 9:06 PM No comments:

The Rock Cafe is Rocks Back to Life

It’s been a popular Route 66 stop since 1939 and a year after fire gutted everything but its stone walls, The Rock Café in Stroud Oklahoma has reopened. The café was named for its walls made of rock removed to build Route 66 between Oklahoma City and Tulsa.
Owner Dawn Welch has kept busy cleaning up the restaurant, considering her own cooking TV show and writing a cookbook called Dollars to Donuts

.
More about the Rock Café on OldRoutes.com
And other Links
Story about reopening with video from NewsOK.com
Rock Cafe's Blog
Owner Looks Back on year from news9.com.
Buy Dawn Welch's book, Dollars to Donuts


Posted by TheRoadGeek.com at 4:30 PM No comments: 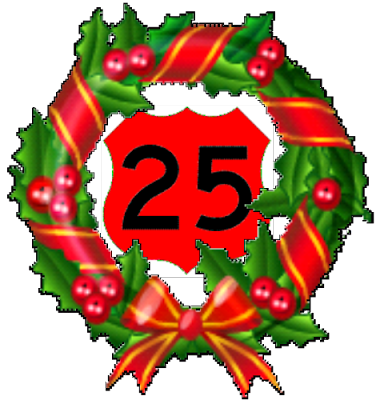 and a Happy and Safe New Year of enjoying Old Routes!
Posted by TheRoadGeek.com at 3:38 PM No comments: 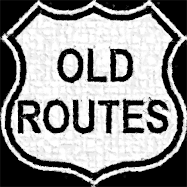